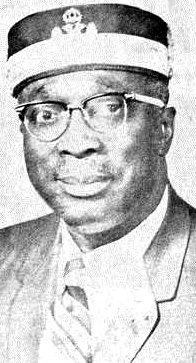 Gladstone Wesley Allen was a man of achievement.  He was a medical doctor, pioneer, civil rights activist, and Prince Hall Mason.

He received his initial education in Philadelphia and his medical degree from Meharry Medical College in Nashville, Tennessee.  He attended the University of Pennsylvania Graduate School of Medicine for four years.  He lived and worked as an obstetrician and gynecologist in Fayetteville from 1941 until his death on January 20, 1995, at the age of 79.  Dr. Allen delivered over 7, 700 children in his more than fifty year career.

Among his many accomplishments, he helped start the state’s first school for the mentally handicapped black youths, The Fuller School on Jasper Street.  Dr. Allen, an orphan himself at the age of twelve, found homes for more than 200 local orphans, including eight raised by himself and his wife, Sylvia.  Unsurprisingly, he would serve on the Board of Directors of the Central Orphanage in Oxford, North Carolina.  Dr. Allen also helped to found the Seabrook Park, the United National Bank, and Cape Fear Industries.  Additionally, he built the largest black owned nursing home in the state of North Carolina, Gladhaven Nursing Home.  He also served as president of the Fayetteville NAACP from 1966-1968 and was very active in the Civil Rights Movement.  He helped to bring integration to Fayetteville in the 1960s; even allowing his office to be an informal gathering place for demonstrators.  Dr. Allen was also a life member of the Omega Psi Phi Fraternity as well as a member of other civic, social, and business groups.

Dr. G. Wesley Allen was a dedicated Prince Hall Masonic leader in the Jurisdiction of North Carolina.  He served as the Past Master of Eureke Lodge No. 3; the Past Commander in Chief of Evans Consistory No. 62; the Grand Junior Warden of the North Carolina Prince Hall Grand Lodge; the Past Sovereign Grand Deputy of the Orient of North Carolina; the Imperial Medical Directory and Chairman of the Health and Medical Research Foundation of the Ancient Egyptian Arabic Order of the Noble Mystic Shrine; and the

President of the Fayetteville Prince Hall Masonic Corporation.  In his capacity as the Sovereign Grand Deputy of the Orient of North Carolina, Dr. Allen was the head of all Scottish Rite Masons in North Carolina from the 4th through the 33rd degree.  He was also the Deputy of the Loyal Ladies of the Order of the Golden Circle.  In 1975, Dr. Allen set as his goal to increase the number of Assemblies from 13 to 25.  His objective was to establish an Assembly for each of the Consistories located in North Carolina.

Because of all the many contributions Dr. G. Wesley Allen made to the Masonic Order, the Scottish Rite Masons awarded him their highest honor, the Gold Medal of Achievement.  In continuing the legacy of Dr. G. Wesley Allen, the G. Wesley Allen M.D. Scholarship Foundation, Inc was established.  With the support of the community, the Prince Hall Masonry, local businesses and organizations, the Foundation has awarded annual scholarships since its inception on September 23, 1998.